The Italian cultural manager Paolo Petrocelli selected by the prestigious organization Friends of Europe among the 40 most influential young personalities in Europe.

Paolo Petrocelli has quickly established himself on the European and international scene as one of the leading cultural managers of his generation.

Today it is also recognized by Friends of Europe, one of the most important European think tanks in the world committed to promoting a new vision for a more prosperous, sustainable and inclusive Europe.

The organization at the top of which several former Presidents of the European Commission and  Parliament and former Prime Ministers, including Herman Van Rompuy and Jean-Claude Juncker, each year selects 40 of the most influential under-40 personalities in Europe: young leaders who through their civil and professional commitment have managed to establish themselves for their ability to generate a positive impact within the European Union in various fields including: politics, business, science, culture, sport, media.

Among the European Young Leaders of 2022 has been nominated Paolo Petrocelli, Italian cultural manager and university professor, currently Director General of the prestigious Stauffer Center for Strings of Cremona, the first international music centre for higher education dedicated entirely to string instruments.

A passionate, innovative and dynamic manager with an extensive experience in leadership positions in a variety of organizational settings, Petrocelli is an international relations and global cultural affairs expert.

Paolo’s work is driven by the belief that culture, arts and education are a major force for growth, development and change on the global level.

He is the Founder and President of EMMA for Peace (Euro-Mediterranean Music Academy), one of the world’s largest international non-profit organizations for the promotion of a culture of peace through music diplomacy and education in Europe, Middle East and the Mediterranean region. He is the Founder and Honorary President of the Italian Youth Association for UNESCO, the largest youth organization in the UNESCO system, and Cultural Diplomacy Officer for the World Summit of Nobel Peace Laureates. As a cultural and performing arts manager, university professor and researcher, he has become one the most influential and innovative global cultural leaders, collaborating with some of the most prestigious international organizations, major music institutions and world-renowned artists like United Nations, European Commission, Rome Opera House, Coldplay.

Petrocelli holds a PhD in Cultural Economics Marketing and Creativity from the IULM University of Milan, an Executive MBA from SDA Bocconi School of Management of Milan, a Diploma in Violin Performance from the Conservatory of Santa Cecilia of Rome, a BA in Literature Music and Entertainment from La Sapienza University of Rome and a BA (Hons) Music from Middlesex University of London.

He has been a Visiting Fellow at Yale University and a Visiting Researcher at MIT Media Lab, the interdisciplinary research laboratory at the Massachusetts Institute of Technology.
Today he is a Research Affiliate at the metaLAB (at) Harvard.

Launched in 2012, the European Young Leaders programme is a unique, inventive, and multi-stakeholder programme that aims to promote a European identity by engaging the continent’s most promising talents in initiatives that will shape Europe’s future. The selection of the young leaders is handled by a committee chaired by European personalities of the highest level, including the current President of the European Parliament, Roberta Metsola (herself appointed Young Leader in 2018). 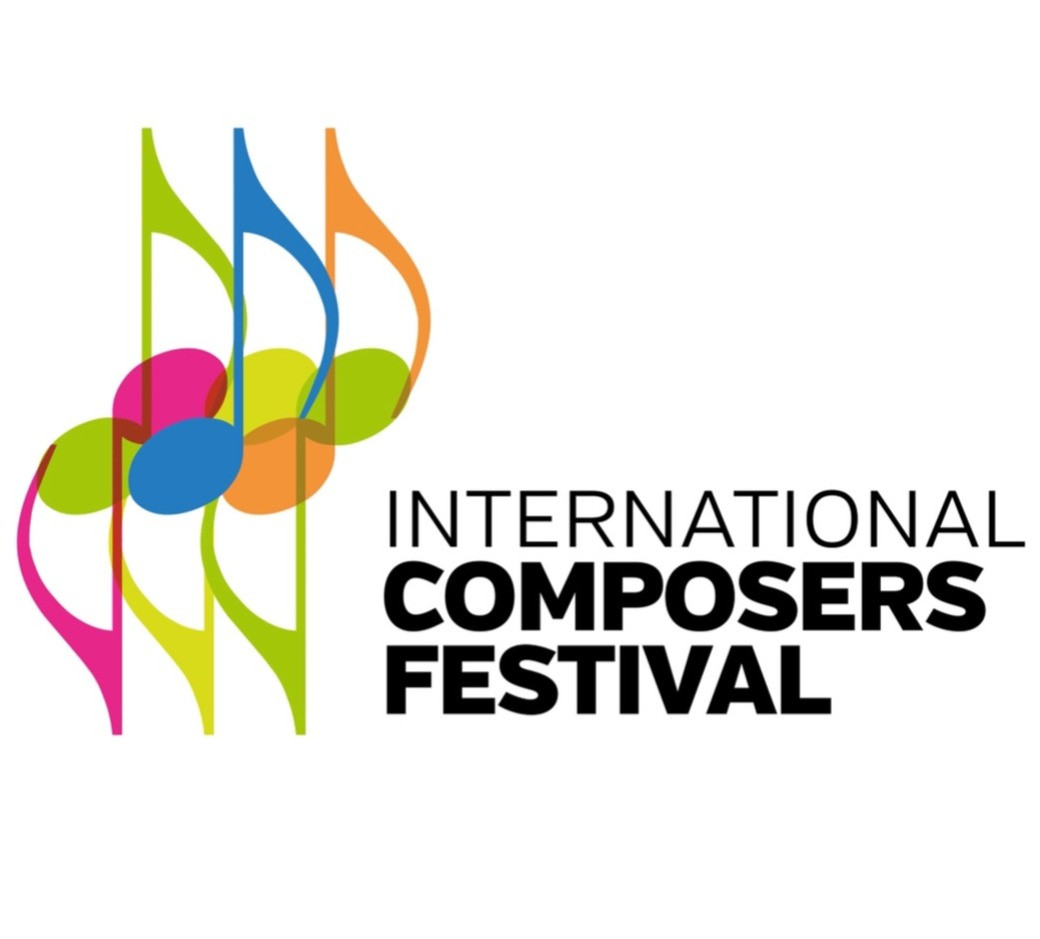 We are proud to announce a partnership with the International Composers Festival to develop join initiatives for the promotion of Music Diplomacy.

ICM is the only festival of its kind in the world, promoting melodic classical music created by living composers.

Guided by the commitment to education and training, EMMA continues its global journey promoting understanding and goodwill through community and international programs. 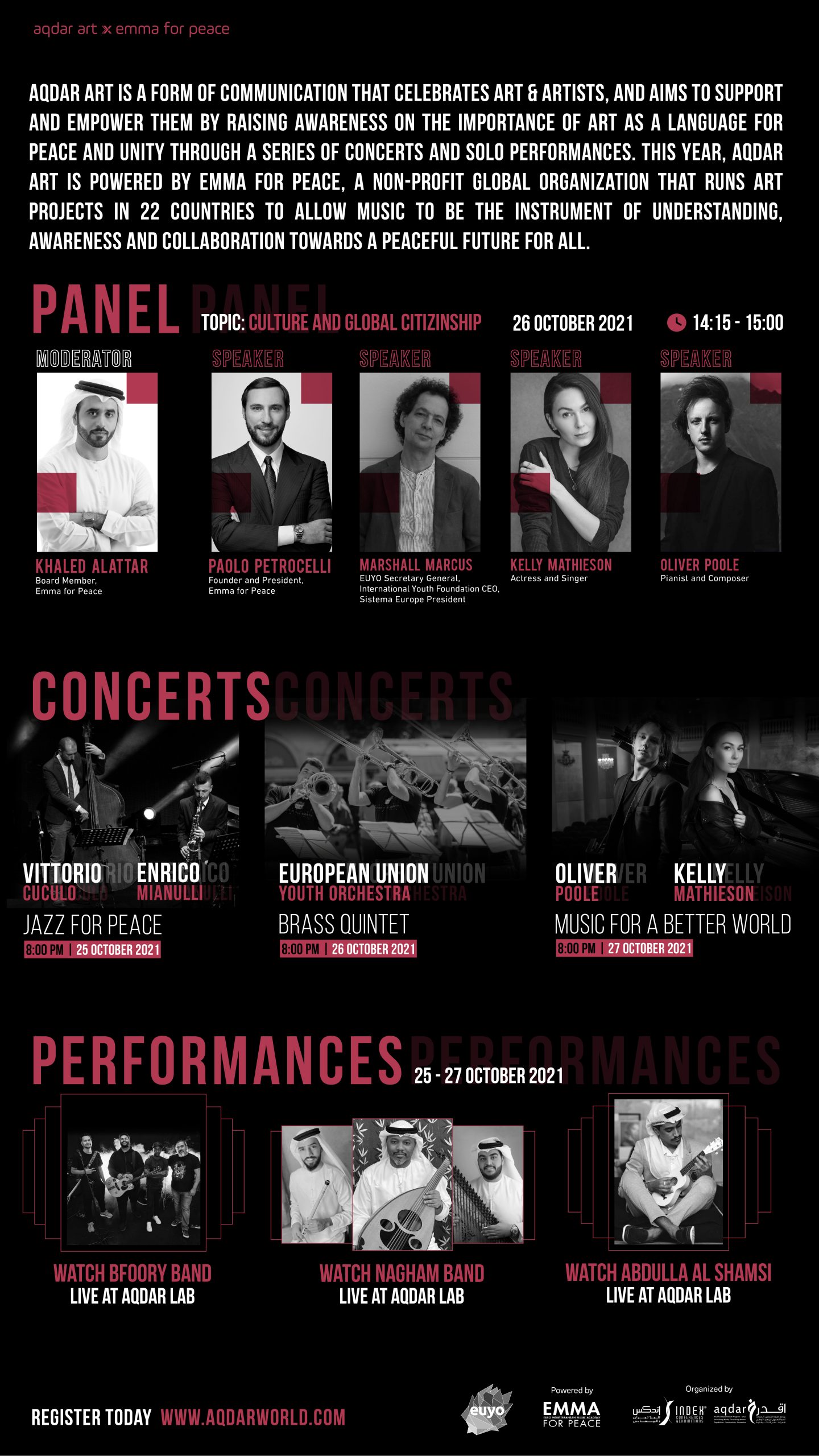 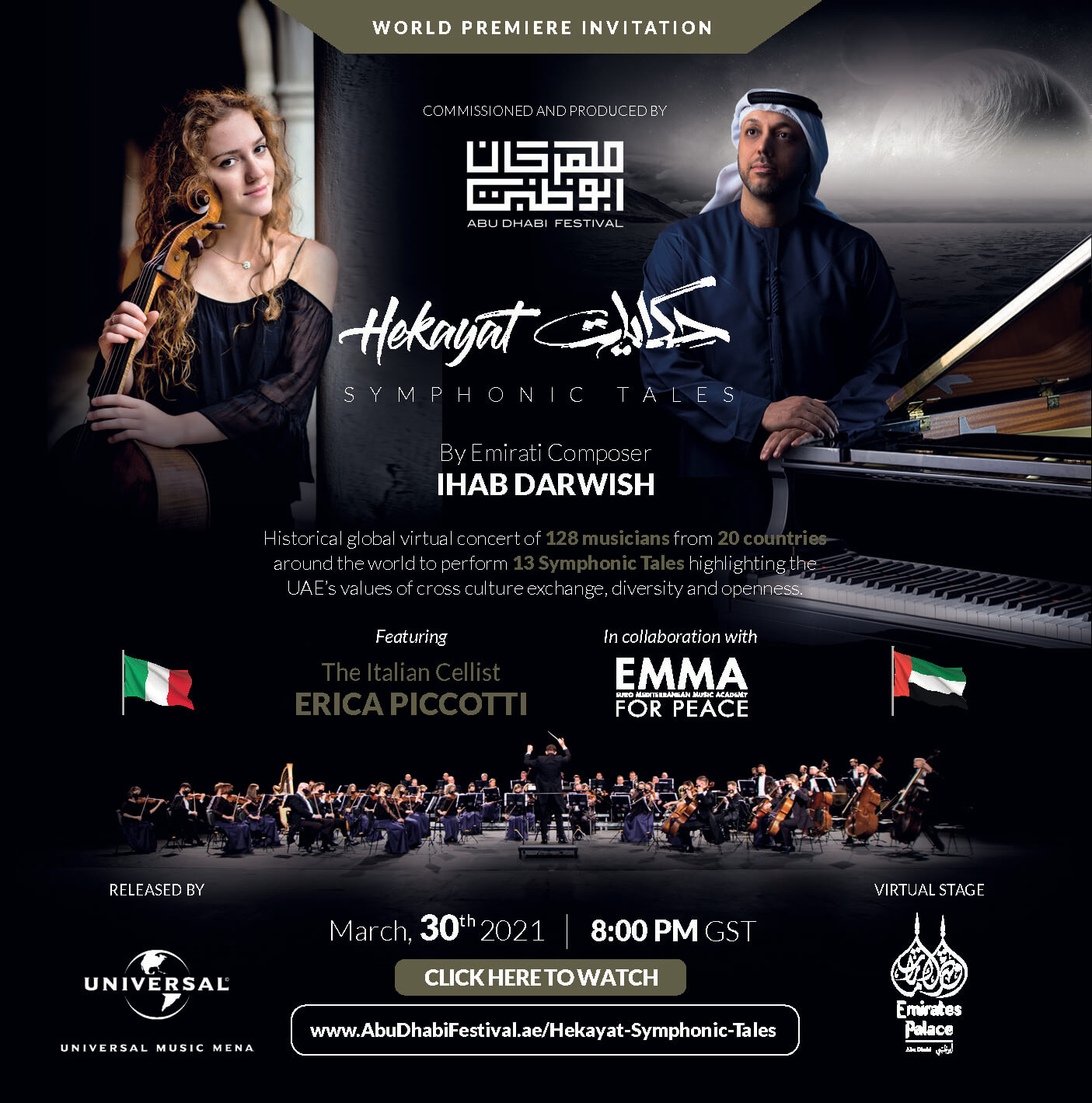 EMMA for Peace is pleased to invite you all to attend a very special event: the world premiere of Hekayat – a project by Emirati composer Ihab Darwish presented with a virtual concert at Abu Dhabi Festival 2021.Hekayat is an excellent example of music diplomacy: a global performance of 13 compositions is played by 128 musicians in 20 different countries.EMMA for Peace contributed to this inspiring initiative through the participation of young talented Italian cellist Erica Piccotti.Don’t miss the World Premiere on March 30th! 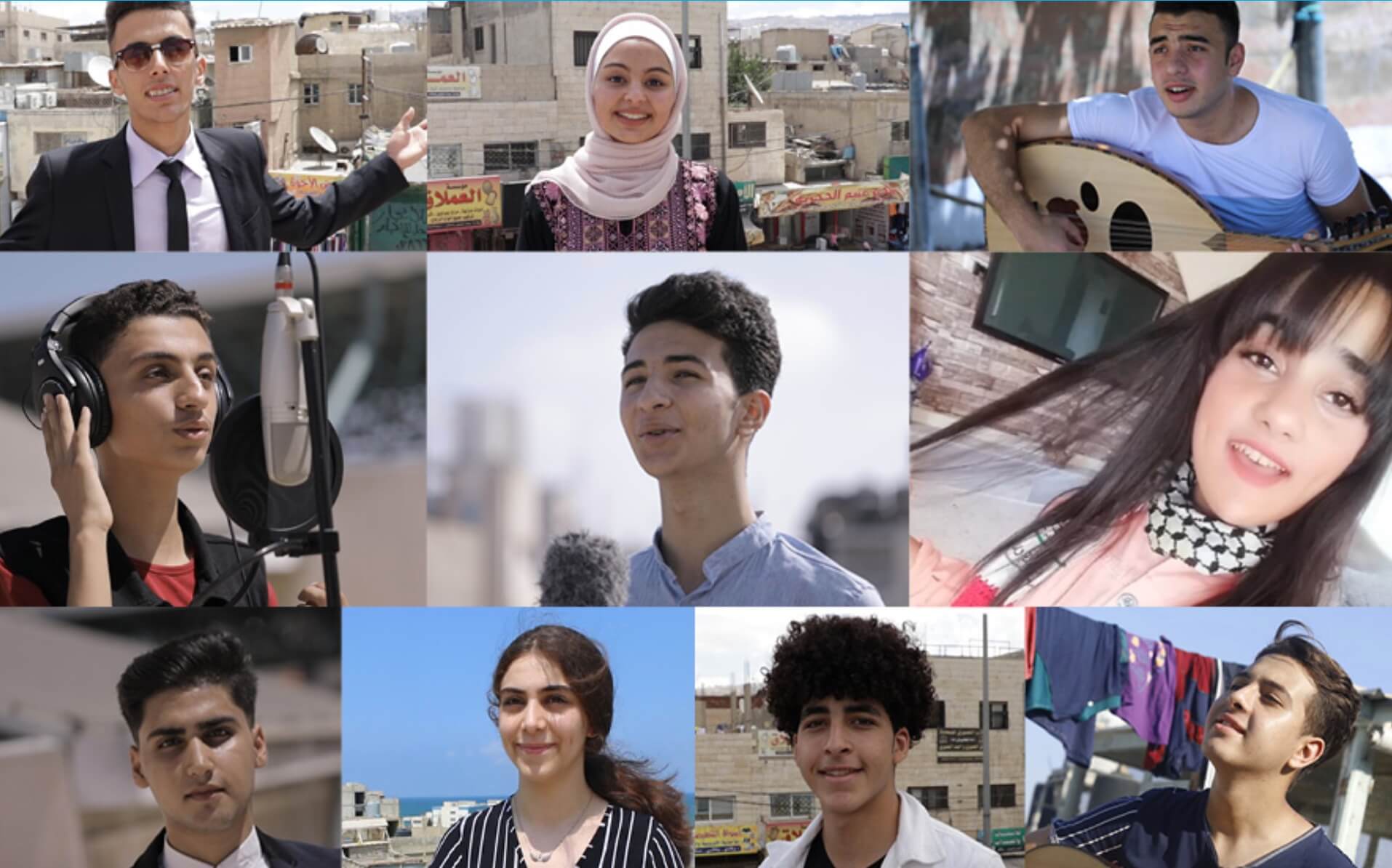 We are thrilled to finally be able to share the result of a two years collaboration with UNRWA, the United Nations Relief and Works Agency for Palestine Refugees in the Near East.We release today “United as One”: a song-hymn to hope and brotherhood, composed by a group of 23 young Palestinian refugees, in collaboration with a collective of international songwriters and musicians (Davide  Dileo, Jordan De Maio, Lydia Lyon, Zeina Barhoum, Amir Issaa), under the artistic leadership of Paolo Petrocelli (Founder and President of EMMA for Peace).The song represents the voices of over half a million Palestine refugee girls and boys studying in more than 700 schools operated by the United Nations Relief and Works Agency for Palestine Refugees (UNRWA) in the Gaza Strip, Jordan, Lebanon, Syria and the West Bank, including East Jerusalem.Paolo Petrocelli, Artistic Director and Coordinator of the project, calls the collaboration once-in-a-lifetime experience. “We worked all together, students, musicians, cultural operators as one team for two years. Through music we were able to break down all language barriers and cultural differences. The song we have created is the new anthem of young Palestine refugees: a message of peace and love for the entire humanity. For the first time, living through the COVID-19 pandemic, we too experienced everywhere in the world, for a limited period of time, difficulties in freedom of movement and living under a state of emergency. Although this does not compare to the reality that people in Gaza are living, we were able to gain a glimpse of their suffering. With this song we turned their grief and sense of helplessness into strength and hope”. 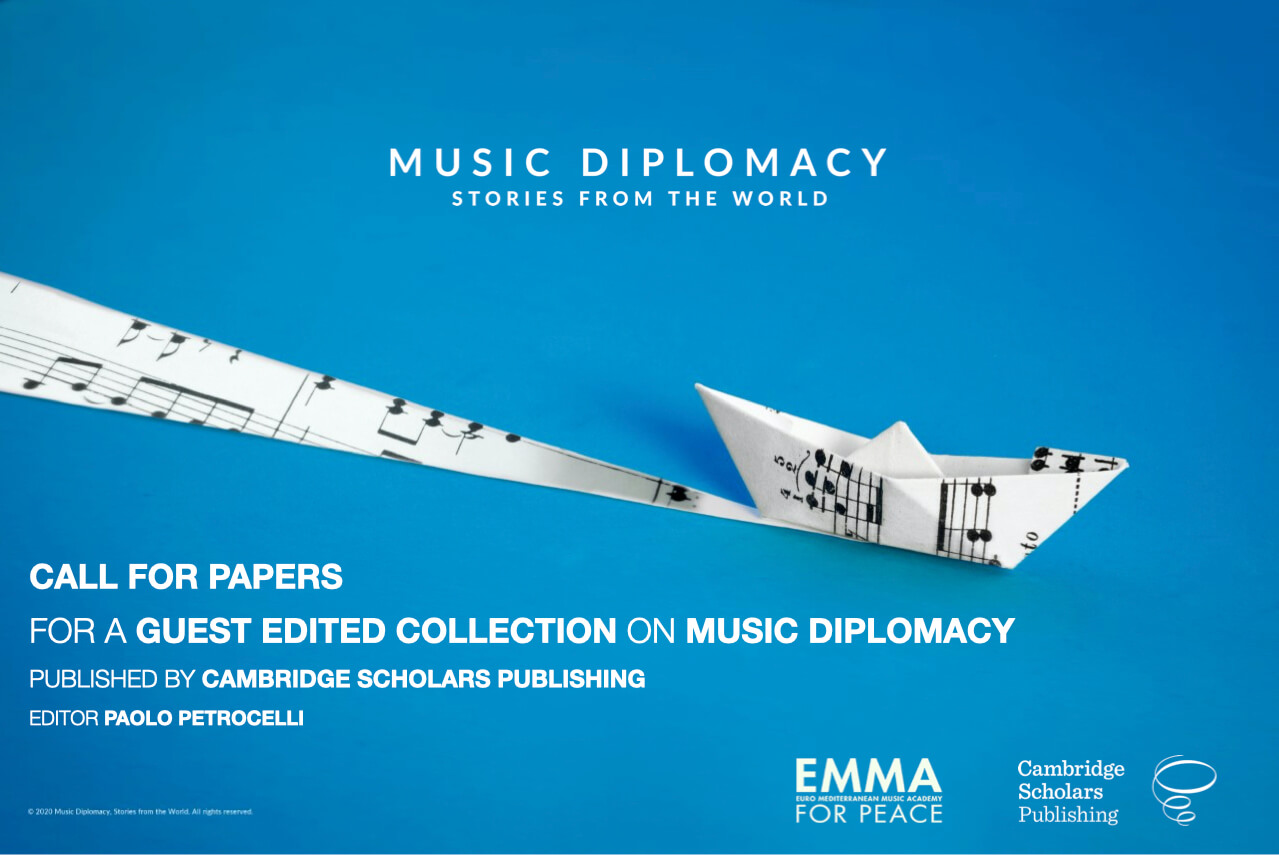 CALL FOR PAPERS ON MUSIC DIPLOMACYEMMA for Peace, in collaboration with Cambridge Scholars Publishing, is pulling together a guest edited collection called Music Diplomacy: Stories from the World.Music, a universally spoken language that closes language barriers, a symbol of peace. The book examines the effectiveness of this art form in international affairs, global development, and social justice effort through the stories and insights of international scholars, artists, diplomats and professionals.We would like to invite musicians, scholars, experts, diplomats, activists and journalists working in the field to consider submitting one or more chapters.A Chapter should normally be no longer than 6000 words, and should be original and previously unpublished. If the work has already been published (as a journal article, or in conference proceedings, for example), the Publisher will require evidence that permission to be re-published has been granted. 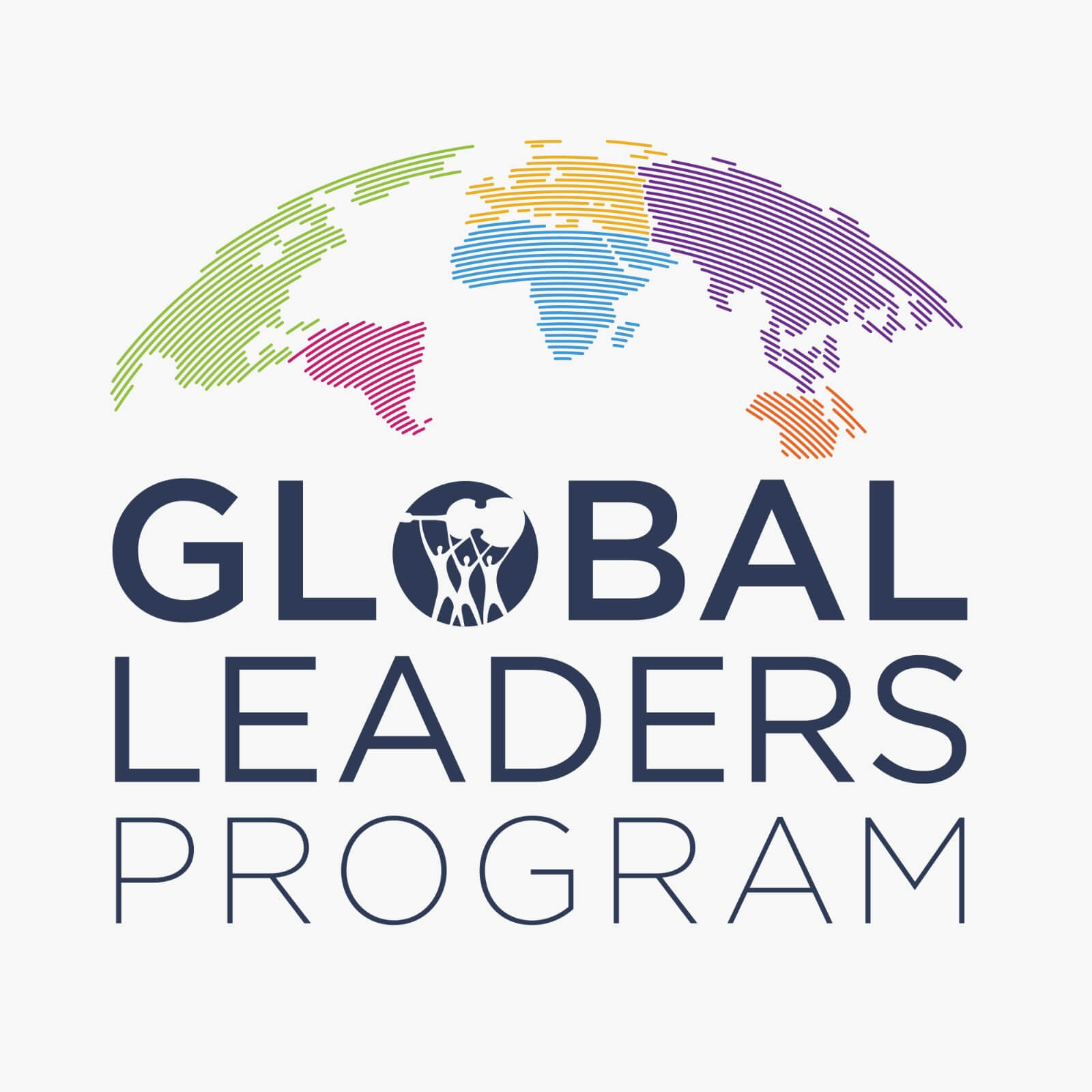 We are proud to announce a partnership with The Global Leaders Program to jointly develop contents in regards to Music Diplomacy around the world, during the 2021.The Global Leaders Program empowers arts changemakers to grow organizations that impact communities through an innovative twelve-month Executive Graduate Certificate in Social Entrepreneurship, Cultural Agency, Community Development, Business Management & Teaching Artistry.Guided by the commitment to education and training, EMMA continues its global journey promoting understanding and goodwill through community and international programs. 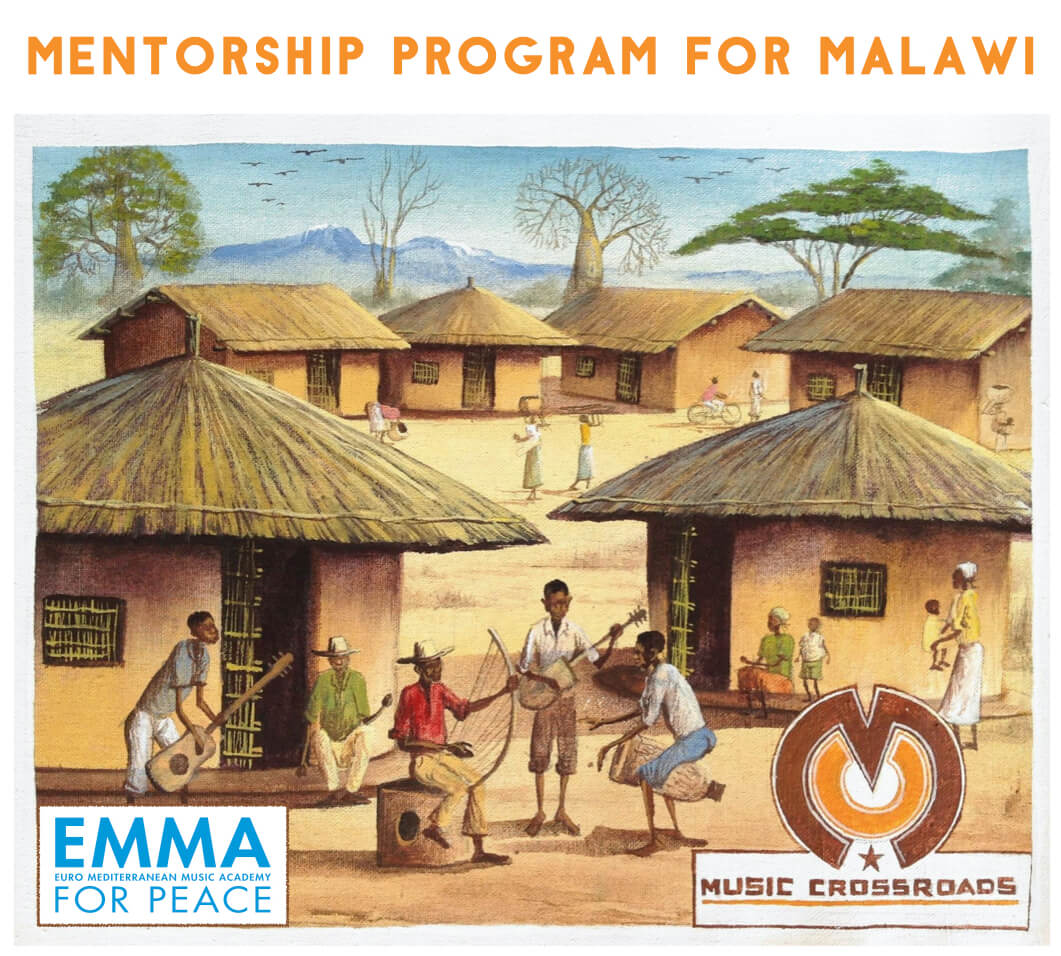 We are proud to announce a partnership with Music Crossroads to jointly develop and promote social-engaged music initiatives in Malawi.Paolo Petrocelli, Founder & President of EMMA for Peace, will work along side with Gladson Msendera, music teacher from Music Crossroads Malawi, on delivering a mentorship program for local musicians and music managers.Music Crossroads is a non-profit organisation that supports the development of music education and the music industry in the southern African region.Guided by the commitment to education and training, EMMA continues its global journey promoting understanding and goodwill through community and international programs. 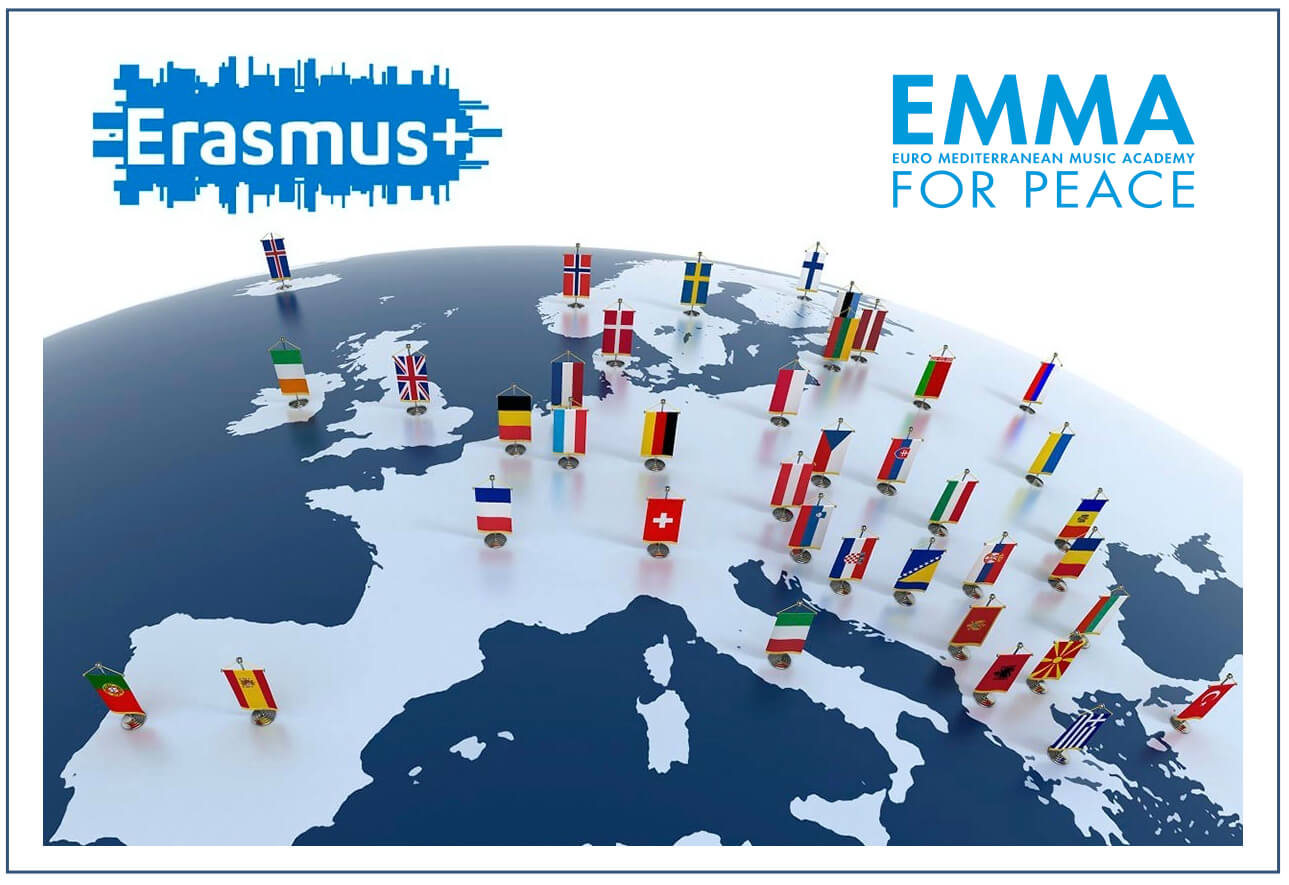 EMMA for Peace awarded another grant for a new Erasmus+ project

EMMA for Peace continues to promote the values of the Erasmus+ Programme by changing the lives and opening the minds of young professionals and youth leaders.

The organization has been successful for the second time in gaining Erasmus+ funding to organize a new youth project, which will bring together in 2020/2021 participants from Germany, Morocco, France, Romania, Turkey, Egypt and Lebanon. 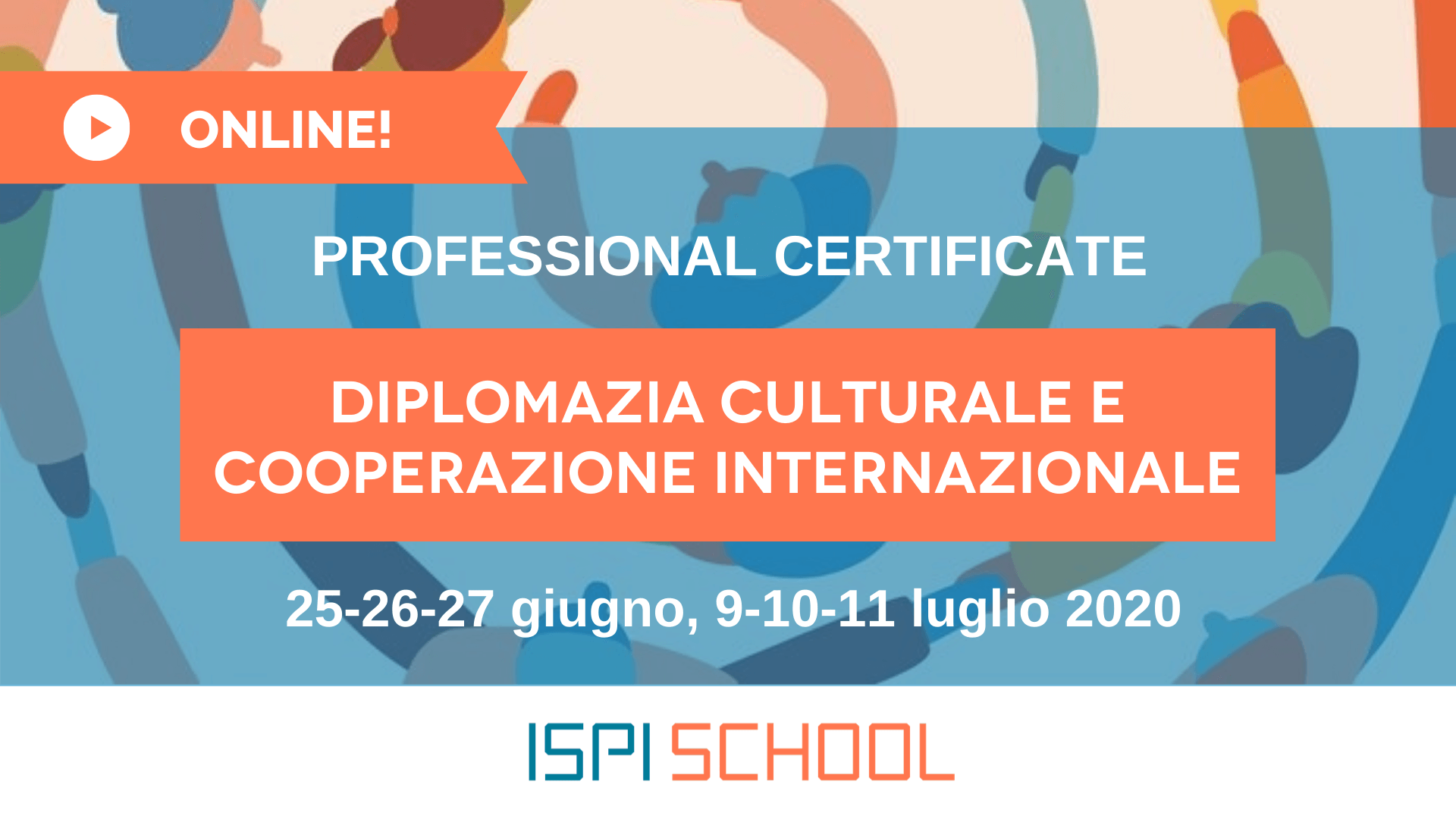 EMMA for Peace is proud to be partner for a professional training course on cultural and music diplomacy and international cooperation organized by ISPI, the Italian Institute for International Political Studies.

The course will be delivered online and in Italian.  More info here